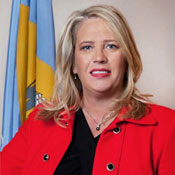 “They’re asking people to consider how they would react is they found out how much their co-workers made, especially if they found out, for the same credentials and responsibilities, they were making $10,000 less, with the only difference being gender.

She’s among a group of legislators who, for the second time, are spearheading a package of women’s bills, unveiled one day after Equal Pay Day on April 12, 2016.

‘I don’t think anyone has spoken up for us,’ said Keeley in an interview with WDEL. ‘And I think you have a group of women legislators who have seen it time and time again…and who are willing to stand up for the women who don’t have a voice.’

One of the measures, House Bill 314, aims to end the shroud of secrecy surrounding salaries that Keeley said allows men to be paid more than women. New legislation would make discussing salaries in the workplace more commonplace in hopes of creating a more level playing field.

‘It will then give her the ability to say, ‘Hey, Joe Smith, you and I are at the same level, what do you make a year?’ If he refuses, and she finds out exactly what the person’s making, then she has the ability to go back and say, ‘You know what? I work just as hard, I work just as many hours; I have the same exact workload, and I don’t understand why this person is being paid more than I am.'”