Getting to know NFWL Board Member, Wisconsin Representative Kathy Bernier 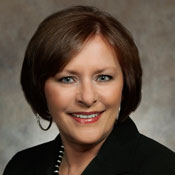 Representative Bernier is a former Wisconsin State Director for NFWL, and currently serves on the NFWL Board of Directors. In just a few weeks, she is hosting the Second Annual NFWL Wisconsin Spring Symposium for Women Policymakers. This event brings together women on all levels of government, as well as those interested in running for office in Wisconsin, for leadership training, networking events, and support. You can view the full agenda here. Registration for this event is still open! Click here to register. NFWL got the chance to sit down with Representative Bernier and take a closer look at her perspective on leadership.

I think a leader, generally, is a self-motivated, strong willed person; someone who has a vision and acts on it. Rather than just sitting around and waiting for things to happen, they make things happen. I find the best leaders I’ve met are also do-ers, meaning that if you’re the boss, you don’t just order people around; you lead by example. I think the best leader is the one who is willing to step in and help out whenever needed; therefore other people are more willing to follow, when a good example has been set.

What is the Wisconsin Spring Symposium about? What inspired you to hold such an event?

Here’s another attribute of a leader: When somebody asks you to do something and take a leadership role, often times there is a title attached. I was asked if I would be the State Director for the National Foundation for Women Legislators. “We had a little “coffee” at the Capitol, and that’s all well and good.” Those events get people around the table, to discuss issues, but we don’t come with anything that is generally of significant value, action items.

Rather than just take on a title, the one thing I’ve done a lot in my life, as a leader, is set up organizations that are there to help people. My goal is help people gain information and leave with more knowledge than they came with. I headed up the Chippewa County Clerks Association. All of the municipal clerks and I, as the County Clerk, met on at least a quarterly basis to do education and training, whether it had to do with elections or open meetings or open records. So, that got me thinking, if NFWL wants to become a great powerhouse of an organization, we need to start at the grassroots level, meaning we need to start at the local level.

I took my past experiences, created a seminar type environment, and got sponsors so the cost is almost nothing. It’s open to elected women in towns, cities, villages and counties. It’s also open to women leaders in municipalities that would like to come in and learn about how to run for office. Or if they are currently running for office, this event offers them some tips and ideas from networking with other leaders in the community.

Do not fear it. It seems that, little boys, at a young age are ready and willing to speak out and often, the girls sort of hang back. They work diligently behind the scenes, (you can’t get a better worker than a woman), but they are not out in the front. We need to let these young girls know that they can be the leader. They can be out front.

By the same token, I don’t want to pressure young women to think that they have to be something they are not. Defining success in a person is subjective. When I was a young woman and I got married, and had children. My goal was to be the best mother possible. I want to spend as much time as I could with my children. I read to them, to them on field trips and to take care of them. I worked part time jobs in order to be home with my children as much as possible. To me, at that time in my life, that was success.

As time went on, I decided I wanted to do something more, so I went to college and chose a career path. Whatever decision a woman makes for herself is success in my opinion. But if you want to run for office, if you want to be a leader at the local level or the state level, just know that you can do it, and that you don’t have to know everything ahead of time. Trust me, men pretend they know it all and they really don’t either.

When did you first realize you were a leader, in any situation?

I recognized that when I was a freshman or sophomore in high school. I came from the town of Hallie, the high school was in the city of Chippewa Falls, so I didn’t know a lot of the student body. I decided I wanted to run for student council, I tried out for cheerleading, and distributive education. Even as an alternate in student council, I did most of the work. I put together the Sadie Hawkins Day pep rally, made the materials, and got people working on floats.

When I got married and had children, I still volunteered for schools, doing bike-a-thons, and all sorts of fundraising events. But it wasn’t until my children were all in school full time that I decided it was my time to pursue my career. I worked part time at the county, I didn’t appreciate some of the things the County Clerk said and did, and so I set my sights on running for that position. My graduation party was also the kick-off for my campaign for County Clerk! Four months later, I won the election and six months later I took office as County Clerk. I guess the rest is history.