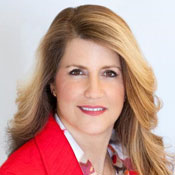 When NFWL Board Member and Chair of Membership, Serena DiMaso isn’t serving the people of Monmouth County, New Jersey as their dedicated Freeholder Deputy Director, she’s saving their lives as a volunteer with emergency services.

We interviewed Freeholder DiMaso this month as part of our new NFWL Interview Series to hear more about her volunteer work and her thoughts on how elected officials can go above and beyond the call of duty to volunteer in their communities.

As well as serving as an elected official, you also volunteer with emergency services. Can you shed some light on your work with these services – tell us how you got involved and how you contribute?

I got involved because about 9 years ago or so my sister wanted to take a first aid class and asked if I would take it with her. I was the mayor of the town at the time, so we took the class together, and they asked if she would consider volunteering for the squad because they needed volunteers. She said to me, “We’re not doing anything else, why don’t we volunteer?” Even after she had to quit, I remained. I got involved; I took the training and fell in love with doing it. It’s actually one of the most rewarding volunteer positions that I hold. You can see the results of what you’re doing pretty quickly. Somebody needs you; you get in your car and head over.

Most of the time you are coming from home or from some other location so you have to first get to the building. Time is always of the essence, so it’s a little bit of an adrenaline rush. I’m a little bit of an adrenaline junky, so that’s always been something I enjoy. You get on scene and you address the situation; it’s problem solving. You just go into that emergency mode, you help people, and you see the result of what you are doing just about right away.

In New Jersey, we have first aiders, we have EMTs, we have paramedics; it’s a tier that depends on what level of training you have, and on what assistance you can give to a patient. But the paramedics are paid people. EMTs, first aiders, first responders are generally not paid.

How often do you volunteer?

My squad works every weeknight; we have coverage 7 pm to 6 am. We have specific crews who volunteer for those nights. I usually do Wednesdays and occasionally Thursdays, and we rotate Saturday night. With my calendar and my schedule, because I have some flexibility, I can answer during the day as well. They push the calls through my phone now. Our chief is a genius. He created a text messaging system that picks up the radio and sends it to you on your phone. So it will literally send a text to my phone with the actual call. If I’m in the neighborhood, I’ll call the police department and tell them I’m available.

Yesterday I actually did three calls in high heels and a dress. And it’s not the first time I did it. I keep a little first aid jacket in my car, and I’ll throw that on over my dress. They were short on volunteers, and in that case I did help the patient. If there’s a female patient, we always like to try to have a female volunteer to make people feel more comfortable.

How has being a public official influenced your work with this squad? How has your position helped or hindered your involvement?

Most people don’t recognize me. I don’t know if they are just thinking, “Why would the Mayor, or now the Freeholder, be on a first aid call?” Plus, generally speaking, if it’s in the middle of the night or early in the morning and I haven’t left for work yet, I have my hair in a ponytail. I usually don’t have makeup on. So I’m not the same looking person to them. My trademark is my long blonde hair and when its up in a ponytail, my underneath hair is very dark. So the police know it’s me, but most people, don’t have any idea it’s me. Even with my nametag on, they don’t process that it’s me.

We offer a program through the township that allocates a few thousand dollars a year to go into a retirement account for first aiders and fire, and I don’t take that. It’s not legislated that I don’t receive it, but I don’t think it looks right as an elected official who approved that law and put that statute into place, now to take money from it.

I do worry sometimes about how people remember you during an emergency call. When you’re on a call the people you are dealing with are in the middle of an emergency, a highly stressful moment in their life. Sometimes you have to be pretty strict. If someone has had a heart attack or needs CPR, you have to say to loved ones and family members, “Okay you need to go over there and let us do our job,” and you don’t want people to remember you as yelling at them and not being particularly kind to them in a stressful situation. But sometimes you need to be that person.

That concern doesn’t necessarily stop me from doing what I need to be doing but what I normally do afterwards, is go back to the family and say something like; “I’m sorry it got a little heated in there”, and kind of smooth it over. Generally speaking they’re really okay with it afterwards. I’m typically the person my squad depends on to calm patients or loved ones down to begin with. Even if the police are pushing them back or whatever, I will go and sit with them and talk to them. Or if it is the patient who is having an anxiety attack or having some kind of issue, I’m generally the one who sits down on the floor with them and talks to them and hears what they’re saying and makes them feel better.

And with anything I do, as long as I feel like I did all I could and I’m true to myself and true to the job that I’m supposed to be doing, then if people have a problem with it, that’s something I can never change. Quite honestly, I’ve answered calls to people who have written some really visceral attacks about my performance as Mayor, or even now as Freeholder. I show up at their home and they’re surprised that I would still come help them. And it’s ridiculous for someone to say, “Oh my gosh you’re helping us,” and I say, “That’s my job. My job today is not Mayor, my job today is first aid.”

Do you believe its important for elected officials to be involved in this kind of community service, and what challenges do you think appear in doing so?

I think there’s always going to be a barrier because when you start to volunteer, like when I first volunteered with the first aid squad, there were some people on the squad that did not want me to be there because they thought I was only doing it for political purposes or that I was going to politicize my being on the squad.

You might have to persevere a little bit for people to see that you’re not doing this because you want another line on your resume, but that in fact you really want to help people. So quite honestly, the best place for you to start would be in the soup kitchen, where you just show up anonymously. Go to your local food pantry, where people see you and get to know you and start to talk to you. At first, they’ll meet you as Mary, and then when they ask you what you do, you can tell them who you really are.