(Alexandria, VA) – The National Foundation for Women Legislators was honored to have elected women from across the country and numerous nonprofit and advocacy groups come together for their 2016 Human Trafficking Summit in Washington DC, June 16-17. Twenty-five elected women, from both the state and local level, joined Summit Co-Chairs Michigan State Senator Judy Emmons and Montana State Representative Kimberly Dudik, for a day and a half long discussion on one of the most critical issues in America today: child sex trafficking. The legislator attendees were specifically selected due to their roles as champions of human trafficking legislation in their communities, and ability to advance the fight against trafficking with the further knowledge and support provided by the Summit.

The NFWL has a long history of supporting the movement to end human trafficking, which includes working with the Department of Justice, and hosting roundtables and policy discussions at their events over the years, including the 2014 and 2015 Annual Conferences in Philadelphia, PA, and Oklahoma City, OK. This Summit was an effort to continue bringing elected women information about human trafficking issues in the United States through policy experts from organizations that specialize in human trafficking solutions.

Keynote and special guest speakers at the summit were Tina Frundt, a nationally recognized advocate on this issue, the Founder and Executive Director of Courtney’s House, and a member of the United States Advisory Council on Human Trafficking; United States Senator Heidi Heitkamp of North Dakota, a leader in Congress in working to combat human and sex trafficking; and former Congresswoman Linda Smith, the Founder and President of Shared Hope International, an anti-trafficking organization focused on combating child sex trafficking through comprehensive, victim-centered approaches.

“I’m proud to join so many women leaders, survivors, and advocates from across the country, who are uniting to launch the comprehensive, coordinated effort communities from small towns in North Dakota to larger cities need to identify and protect victims and to prosecute their captors. In the U.S. Senate it’s been the calls of women legislators that led to bipartisan, legislative results to combat human trafficking, and it’s women like those here today who will continue the fight on the ground” said Heitkamp.

“As the keynote speaker, not only did I feel respected, but they listened to the realties of sex trafficking and wanted to make a difference so that no one else has to go through what I did,” said Frundt, “and what so many others continue to experience.”

“The NFWL’s Human Trafficking Summit was a rare and motivating event, as concerned, dedicated, powerful female legislators gathered to explore how they can improve their states’ laws addressing the egregious crime of juvenile sex trafficking,” said Former Congresswoman Smith

“This summit’s goal was to open the eyes of elected women to the atrocities of human trafficking,” said Senator Emmons, “It exposed the immediacy of this crisis in America: hiding in plain sight in the pews at church, in the grocery stores, and even in our own neighborhoods.”

“Human Trafficking entraps the vulnerable into modern-day slavery, something all of us must take a stand against,” said Representative Dudik. “State Legislatures have great opportunities to enact laws to protect victims, punish offenders, and present this crime from occurring. We must all act together to improve out communities and stop this horrible crime.”

Legislators were honored by special video messages sent in by two renowned advocates on this issue. Cindy McCain, who has dedicated her life’s work to advocacy on issues including human trafficking, thanked those in attendance, and noted the critical need for an ongoing dialogue regarding this issue. U.S. Senator Amy Klobuchar of Minnesota, a national leader in the fight to combat sex trafficking, provided a powerful message reminding legislators of the prevalence of this issue.

Networking breaks in between presentations offered numerous opportunities for legislators and speakers to discuss specific questions regarding the presentations, including policy solutions and resources available. During the breakout roundtable discussions, elected women were able to interact with the speakers in a more one-on-one setting.

The NFWL and all involved in the 2016 Human Trafficking Summit look forward to seeing the positive results from this event and from the continued partnership between elected women, advocates and non-profits, and the NFWL in the fight against human trafficking.

About the National Foundation for Women Legislators, Inc. (NFWL)

Through annual educational and networking events, the National Foundation for Women Legislators supports elected women from all levels of governance. As a non-profit, non-partisan organization, NFWL does not take ideological positions on public policy issues, but rather serves as a forum for women legislators to be empowered through information and experience. www.womenlegislators.org 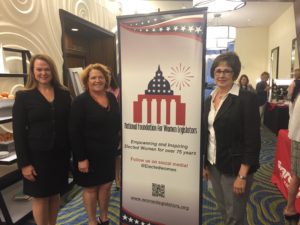