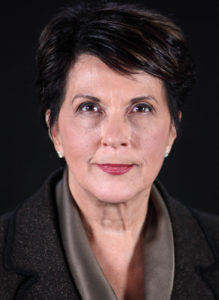 Imagine this: You are a 12 year old little girl who has spent the last year forced to work as a prostitute as part of a human trafficking ring. After a year of unspeakable horrors, you are finally discovered and freed by law enforcement.

Your life looks like it might be taking a turn for the better. You are thinking you can go home to your family, you are thanking any deities you believe in, and praying for the salvation of others across the world who are still in the situation you were in. You feel hurt, and even broken, but free.

And then you are told you are about to go to jail, charged with the crime of prostitution. You are not free after all.

These children, and many more, are who Shared Hope International, and their Founder and President Linda Smith, want to help with the “Protected Innocence Challenge.” The project analyzes all states and assigns them a grade based on how well those states’ laws fight the crime of child sex trafficking, and protect its survivors. Shared Hope International partners with countless organizations to help them expand and implement programs that help victims of human trafficking. Their mission is to “prevent the conditions that foster sex trafficking, restore victims of sex slavery, and bring justice to vulnerable women and children.

The former Congresswoman told NFWL how she got involved in the fight to end human trafficking, and why she founded Shared Hope International.

As a human rights activist, and a Washington State Legislator, Smith was always invested in children and family issues. After she was elected to U.S. Congress through a write-in campaign, Smith heard of the horrors of human trafficking in other countries, and journeyed to Mumbai in 1998 where she built villages and opened safe houses for victims of the child sex trafficking industry. For Linda, seeing children enslaved, being drugged and sold to brothels, changed her life.

“Often, if they are used in prostitution, they could be 12 and be called a woman,” said Smith. “So when I refer to ‘women and children’ as victims, the children are the ones born as a result of prostitution in a brothel.”

While her work to end the child sex trade started overseas, Smith began doing research on the issue of commercial sex domestically in 2006, and participated in projects with the Department of State and Department of Justice.

“I was absolutely shocked,” she said, “I was brought right back to the populations I had been serving in the state of Washington. I found children were being charged with prostitution, and considered criminals, while the people who were buying them were merely receiving fines, if anything.”

To Smith, this was unfathomable. She could not understand why, in the most developed country in the world, victims were being treated as criminals and criminals were being treated as innocents. In fact, Shared Hope advocates for what they call “JuST (Juvenile Sex Trafficking) Response,” laws that not only stop victims of child sex trafficking from being charged with a crime for their own exploitation, but also finds them help and services to deal with the trauma of being exploited. Additionally, they are dedicated to making sure that those who are liable for the trafficking and commercialization of children (traffickers, buyers, and facilitators) are held responsible under criminal law.

These legislative changes can be made possible through the hard work of state legislators, who are able to change existing laws and make sure the victims and their experiences are being taken into account.

At the 2016 NFWL Human Trafficking Summit in the DC Metro Area, June 16-17, Smith will discuss these legislative gaps and barriers to women legislators from across the country, present the Shared Hope “report cards” from different U.S. states, and talk about different ways these legislators can help fight human trafficking in their state. Many members of NFWL have already worked with Shared Hope to institute needed reforms in their states. This Summit is an opportunity for women legislators throughout the United States to take home policies that could change the lives of so many children in their states.

“People think that once you’re elected you have all these resources behind you, all of these legal gurus. In reality, they just don’t have the bandwidth to dig out all of those parts of law within their own code and understand where to start. So we give them help, but it has to come from them,” said Smith. “Some of the best, most gutsy moves I’ve seen have been from women leaders; amazing, passionate, going-to-get-it-done leaders who burn the night oil and make it happen.”

Imagine this: There is a little 12 year old girl out there about to be charged with prostitution because she was part of the human trafficking trade. Before she can be charged, the law is changed, and suddenly she is no longer considered a criminal, she is connected with people she can talk to and services that help provide for her, and she could be reunited with her family. She is also free.