Where are all the politically engaged? At their National Party Conventions!

National Conventions: the symbolic tradition of an occurrence that once chose presidential nominees. Some will tell you that this costly tradition holds very little actual meaning in a time when presidential nominees are presumed midway through primary season. However, these massive gatherings of the party faithful serve to rally the party and mingle with like-minded people who believe in a better future for America. 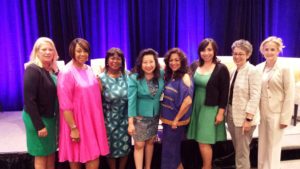 This year, NFWL co-hosted the Inspiring Women Luncheons at the RNC in Cleveland and the DNC in Philadelphia along with numerous other organizations dedicated to the furthering of women in politics. Who better to highlight this month than two amazing women who were not only first time attendees at their party’s National Convention, but also special NFWL guests at the Inspiring Women Luncheons. 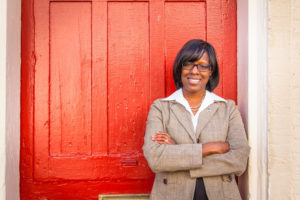 The first African American woman to ever hold statewide elected office in Kentucky, Lieutenant Governor Jenean Hampton was a special guest at the Inspiring Women Luncheon at the Republican National Convention in Cleveland, Ohio. In an NFWL exclusive interview, Lieutenant Governor Hampton discussed her experience as a first time attendee at the RNC.

“For me, it was very heartening to see that there are so many people who take an interest in trying to help shape their government. The take-away for me was, there are still people out there who are committed to improving government,” said Hampton.

According to Hampton, the Convention was full of living proof that citizens of this country have not given up on trying to affect change. Hearing the stories of women conquering their problems through running for office, watching Kentucky State Senator Ralph Alvarado speak on this national platform, and making friends with those from the Hawaii delegation she sat behind, gave the Lieutenant Governor the answer to the question, “Where are all the politically engaged people?” 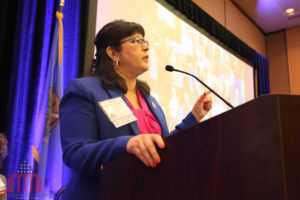 Assemblywoman Irene Bustamante Adams grew up on a farm and in a family that did not discuss politics. This past month, however, she attended her first ever Democratic National Convention in Philadelphia, PA where the importance of following national politics was suddenly very clear to her. She, too, was in awe at the level of active political participation clearly demonstrated by those who attended either as delegates, spectators, and even media.

“Now I have a better understanding of how important it is to be at the table, leading the agenda, instead of being a backseat driver,” she said.

Assemblywoman Bustamante Adams attended the Inspiring Women Luncheon at the DNC as an NFWL special guest and was immediately impressed by the number of organizations with the mission of empowering women. She was grateful to the sponsors and other organizations for their endorsement of empowered women, and she was truly inspired by the women who shared their stories of leadership.

Having come a long way from not discussing politics, to running for office in her state, the Assemblywoman had now attended her first ever National Convention, something she encourages anyone who has the opportunity should do.

“It was phenomenal,” said the Assemblywoman, “I would do it again wholeheartedly.”