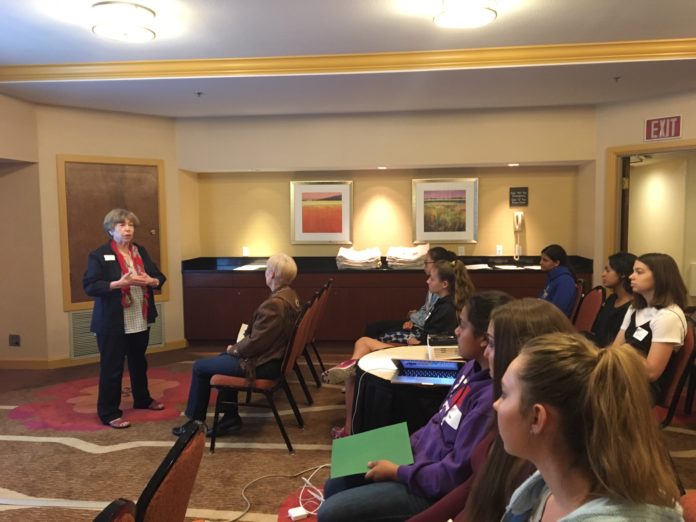 Ambitious teen girls looking to enter the STEM field gathered Tuesday evening for a movie night and coding party where both city council women encouraged them to pursue their dreams.

Laurene Weste and Marsha McLean shared insight on entering the workforce and navigating careers before the attendees practiced coding and watched Academy Award nominated movie Hidden Figures, which tells the story of three women who made an impact working for NASA.

The event was cohosted by the National Foundation for Women Legislators and Google’s Made with Code, who have held these events nationwide in an effort to encourage girls ages 13 to 18 to start careers in science, technology, engineering and mathematics.

The councilwoman told the girls that in addition to fighting for their dreams, they need to guard both their hearts and their health. She also encouraged them to plan ahead and make long bucket lists.

“You are never going to know all the answers, but you can learn the questions,” she said. “Life is a job, so get busy. There is lots to learn and you still have so much left to do.”

Weste also told the attendees never to take “no” for an answer.

McLean encouraged the young women never to give up on their goals and shared her story of losing two city council elections before being elected.

“My message to you is, if you want to do something, do it,” McLean said. “Don’t let anyone tell you you can’t.”

She assured them their futures were bright and asked each of them what careers they wanted to pursue.

Hart High School senior Mary Gooneratne said being one of the only girls in math and computer science classes can often be alienating.

“There’s so much testosterone,” she said. “When more girls are in computer science classes, boys start to change their attitudes.”

She wants to start a career in cyber security after she gets her degree in computer science and engineering from Duke University.

Erica Horak, also a 12th grade student at Hart High, will major in sociology at the University of Oregon in the fall.

“It can get difficult to be surrounded in a field that is predominantly men,” Horak said. “When you have more female interaction, it’s empowering.”