Governor Christie has signed “Charlie’s Law,” legislation sponsored by Senator Diane Allen (R-Burlington) that creates civil penalties for preventing a person with a service animal from accessing a public facility. 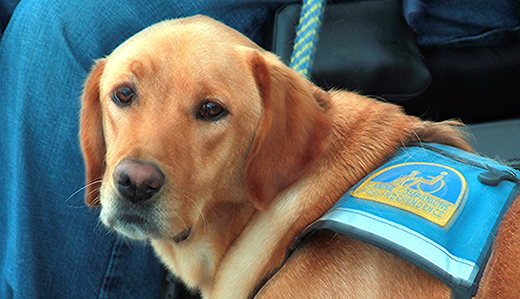 “Charlie’s Law” (S-2662) is named after a service dog who was denied access to an airport while assisting his owner, Ben Shore, a Cherry Hill teen who is on the autism spectrum and suffers from panic attacks.

“Charlie was ordered out of the airport by an employee who did not believe that he was a service dog. That is completely unacceptable, not to mention illegal. Just because a disability is ‘invisible’ doesn’t mean it isn’t real,” Senator Allen said. “Charlie’s Law will empower law enforcement to respond immediately, so that people who are discriminated against in this way get the swift justice they deserve.”

A person who violates Charlie’s Law, in addition to any other relief or affirmative action provided by law, will be liable to a civil penalty of no less than: $250 for the first violation; $500 for the second violation; and $1,000 for the third and each subsequent violation.

Under current law, any person with a disability accompanied by a service or guide dog trained by a recognized training agency or school is entitled, with his dog, to access all public facilities.

To enforce the current statute, the Division of Civil Rights has to conduct an investigation, which is a lengthy process that often isn’t ever finished. “Charlie’s Law” requires local law enforcement to issue a summons and the municipal court would have authority to impose the penalty.

Under “Charlie’s Law,” the penalty assessed will be appropriated to the Department of Law and Public Safety to fund educational programs for law enforcement officers on the right of a person with a disability to have a service or guide dog in a place of public accommodation. The law also requires the Attorney General to establish a public awareness campaign to inform the public about the provisions of the bill.

“Service animals allow people with disabilities to live healthy, safe and independent lives. They are not a luxury,” Senator Allen added. “Anyone who blocks someone with a service animal from entering a public space must be held accountable. I am hopeful that Charlie’s Law will also help prevent these acts of discrimination and raise awareness of this issue statewide.”