The first bill, HB45, requires elementary, middle and high schools to include information about personal privacy, personal boundaries of others and respect. Del. Eileen Filler-Corn (D-Fairfax) introduced the bill. She said it builds upon family life education legislation she passed during the last two years. Those bills covered the meaning of consent and sexual violence.

She said HB45 was inspired by Brandon Farbstein’s personal story. The 18-year-old is an advocate and motivational speaker. But before he was championing legislation at the state Capitol, he was walking the halls of high school, depressed. 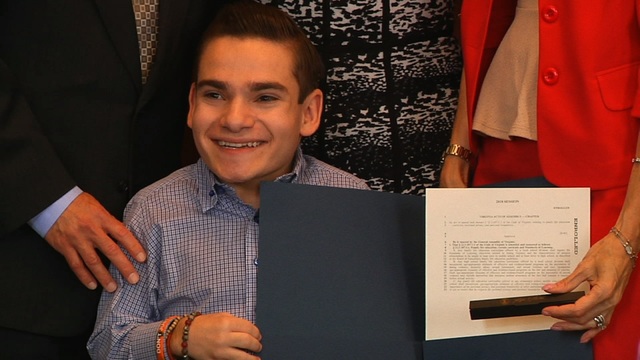 “For me, bullying really was severe,” said Farbstein.

The subject of the bullying? His rare form of dwarfism.

Farbstein said it all happened anonymously from classmates hiding behind keyboards.

“It takes it up a notch because day to day, you don’t know why these kids are sending you all of these disgusting and degrading messages,” he said. “And to walk into an environment where you’re surrounded by 1,500 kids and any one of them could be the perpetrator, it really puts you in a state of terror.”

Today, he shares his story in order to help others going through the same thing. He teamed up with Filler-Corn to bring the issue all the way to the General Assembly. Farbstein was present as the governor signed the bill into law. “My hope for this bill is that it serves as a catalyst to plant some type of seed, whether it is that empathy factor or it’s just teaching children how to be a good person,” he said.

The other bill Northam signed Wednesday is SB101. Sen. Jennifer McClellan (D-Richmond) introduced the legislation, which is also known as Erin’s Law. It adds age-appropriate elements of effective and evidence-based programs on the prevention, recognition and awareness of child abduction, child abuse, child sexual exploitation and child sexual abuse to family life education curricula in local school divisions. “We’ve spent too much time focusing on the after effects of abuse and not prevention,” said McClellan.

McClellan said, since kids can face abuse as early as infancy, it’s important to give them access to this information early. “We really need to start young, age-appropriate teaching to recognize the signs of abuse, that they can do something about it, that they can say no and where to get help,” said McClellan. “And this is a good first step.”