Recognizing today, June 24, as the 100th anniversary of Pennsylvania’s decision to pass the 19thAmendment, Chester County Commissioners Michelle Kichline and Terence Farrell celebrate with women who are 100-plus years “young” and who were infants in the year the equal rights decision was made. 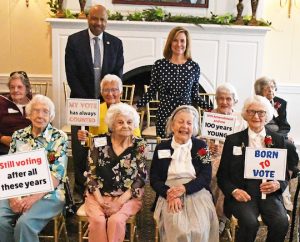 Recognizing today, June 24, as the 100th anniversary of Pennsylvania’s decision to pass the 19th Amendment, County Commissioners Michelle Kichline and Terence Farrell celebrate with women who are 100-plus years “young” and who were infants when the equal rights decision was made.

On June 24, 1919, the Commonwealth of Pennsylvania voted in favor of the 19thAmendment to the Constitution of the United States, providing that the right to vote “shall not be denied or abridged by the United States or by any State on account of sex.”

Chester County has strong historical connections to the lobbying campaign by suffragists. The County was the site of the first Pennsylvania women’s rights convention in 1852, and Chester County was the only county in Southeastern PA to support the (unsuccessful) State Referendum in 1915, to give women the right to vote.  To promote that unsuccessful referendum, Katharine Wentworth Ruschenberger of Tredyffrin Township, commissioned a near-replica of the Liberty Bell, which became known as the “Justice Bell”.  A flatbed truck carried the Justice Bell, with its bronze clapper silenced by chains (to symbolize women’s lack of an electoral vote) to all 67 Pennsylvania counties before it returned to its “home” in West Chester at the Courthouse.

The clapper of the Justice Bell was finally unchained and rang out in September 1920, after the 19thAmendment was ratified.