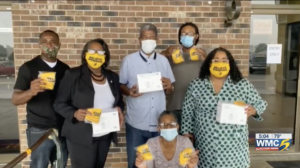 “Mask Up and Live Memphis plans to distribute at least 20,000 masks as we continue to bring on more partners,” said Raumesh Akbari, Tennessee State Senator District 29.

The campaign aims to arm the community with knowledge and resources to ultimately prevent the spread of COVID-19.

The Mask Up and Live campaign launched in Chicago in April.

Camper and Akbari learned about it from Shelby County resident, James Smith. Together the three worked to implement it in the Bluff City.

“We knew that the city and the county have COVID-19 dollars that they could spend on an initiative like that,” said Karen Camper, Tennessee State Representative District 87.

Memphis Mayor Jim Strickland says his office is waiting to receive the paperwork and said it should be signed by this week.

Strickland, along with Camper and Akbari, says the campaign goes hand in hand with the mask ordinance and reminds the residents of Memphis that COVID-19 is still present.

Both Akbari and Strickland say the future of Memphis is in the hands of its residents.

“It’s important that we do this and we have the ability to affect change in our hands,” said Strickland.

“I think that we can still enjoy ourselves, we can still experience the city. It’s a very small thing to put on a mask, but it makes a big difference,” said Akbari.

So far the campaign has been able to get 16,000 masks, with hundreds donated by the Memphis Grizzlies.