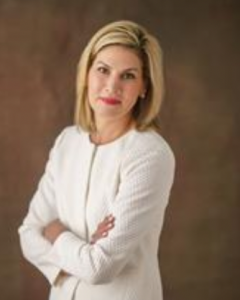 Lorraine Riffle Caron is the Vice President of Global Government Relations for Kimberly-Clark. In her role, Lorraine leads efforts to advance public policy and trade and investment regimes that promote Kimberly-Clark’s work to provide indispensable, high quality, and trusted consumer products for customers in over 175 countries around the globe.

Prior to joining Kimberly-Clark, Lorraine held the position of Senior Director for International Government Relations for Archer Daniels Midland Company. In that role, Lorraine managed a global government relations portfolio and led efforts to advocate for government policies that supported the free, fair, and efficient trade of high-quality food, feed and energy products.

Lorraine’s earlier career included over a decade at Chevron Corporation where Lorraine held positions in Marketing and Government Affairs. Lorraine’s tenure at Chevron included nearly 10 years in Chevron’s Government Affairs function, where Lorraine managed a portfolio that included Europe, North Asia, Africa, and the trade agenda. While at Chevron, Lorraine was selected to participate in the U.S. Department of State Franklin Fellows Program. During her time as a Franklin Fellow, Lorraine served as a Foreign Affairs Officer in the Bureau East Asia and Pacific Affairs Office of Economic Policy where she managed energy and transportation portfolios.

Lorraine’s education includes a Bachelor of Journalism Degree from the University of Georgia’s Grady College of Journalism and Mass Communication. Lorraine also has a certificate in Energy in Developing Economies from Johns Hopkins University in Washington, D.C. and as an undergraduate student, Lorraine was selected to participate in a summer study program at Oxford University’s Jesus College where Lorraine studied Political Science and Literature.

Lorraine resides in Georgetown in Washington, D.C. and has one son who is a sophomore in the College of Engineering at Virginia Tech.