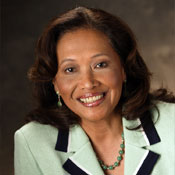 Millie Hallow has served at the National Rifle Association as the Managing Director, Executive Operations, since 1996. Reporting directly to the Executive Vice President and CEO of the NRA, she is responsible for a number of critical areas. As senior advisor for public affairs and public relations, she coordinates and advises both internal and external press and public relations strategy, and reviews all statements and speeches out of the Executive offices. She is the primary liaison for the executive staff with the officers of the board and the 76 member board. She serves as the primary liaison and representative to the various national governor’s associations, senate associations and congressional associations, as well as the Republican and Democratic National Committees. She advises and coordinates policy for fundraising and donor identification and cultivation.

Ms. Hallow is responsible for developing and executing outreach to “non-traditional” constituencies, and is a primary spokesman for the NRA giving speeches all over the country.

She produced a national syndicated radio with Westwood One for over 7 years which aired weekly on over 150 stations. As producer she was responsible for topic development, pre-interviews, and the live broadcast. Guests have included Presidential candidates and other politicians, Hollywood celebrities, authors, sports figures and members of the media.

Ms. Hallow has been responsible for developing and coordinating 4 national book tours for Wayne LaPierre. The first book tour entailed press and book signings in over 100 cities and resulted in a spot on the New York Times Best Sellers list.

From 1977 to 1987 she was extensively involved in Public Arts Administration. She served as Deputy Director and Senior Consultant for the Cultural Alliance of Greater Washington. She was appointed Executive Director of the D.C. Commission on the Arts and Humanities and the Mayor’s Advisor for Cultural Affairs, and as such, was the key arts representative for the District of Columbia, with a staff of 20 and a grants budget of ten million dollars. In California she simultaneously served as the Art in Public Places Coordinator and the Director of Development and multi-cultural activities for the Sacramento Metropolitan Arts Commission.

Ms. Hallow has had extensive experience in Public Education Administration, having served as a policy planner for the School District of Philadelphia, and as Assistant to the Superintendent for the Ann Arbor Public Schools. As Vice President of her own consulting firm, she did the evaluation of the first Education Voucher project in Alum Rock, California with the National Institutes of Education. Her consultancy work included Arlington Virginia Board of Education, Consad Research Corporation, Minneapolis Public Schools, the School District of Philadelphia, and the Washington Center for Metropolitan Studies as clients.

She has also spent 8 years as an elementary music teacher, and directed an award winning children’s chorus. She also served as music director for a number of regionally based musical productions, including the east coast premier of “Metropolis”.

Born in the Philippines, Ms. Hallow came to the United States as a baby. She was raised in Northern California where her parents were tenant fruit ranchers. Speaking no English until she began public schools, she soon excelled scholastically and graduated valedictorian of her high school senior classes, and was the recipient of numerous scholarships at the University of California at Davis where she majored in Political Science and Music.