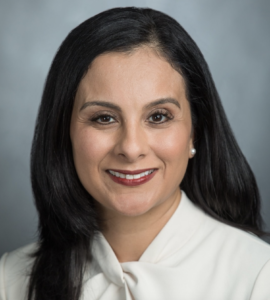 Representative Ina Minjarez was elected to serve the constituents of Texas House District 124 after a special election victory in April 2015. For the 86th Legislative session, Representative Minjarez was appointed to the House Committee on Appropriations where she sits on Articles VI, VII, VIII Subcommittees which oversee natural resources, business and economic development, and regulatory agencies. She serves on the Appropriations Subcommittee on State Infrastructure, Resiliency, and Investment, and is a member of the House Committee on Land and Resource Management and the House Committee on Redistricting. Additionally, she was selected to be part of the very first Criminal Justice Reform Caucus.

During the 85th Legislative Session, Representative Minjarez was named, “Rookie of the Year” by Texas Monthly, received a Certificate of Appreciation from the Department of Defense for her support of military service members in the legislature, and was awarded The Advocacy Women’s Award by the San Antonio Hispanic Chamber of Commerce. She has also recently been appointed as a State Director for the National Foundation of Women Legislators.

In San Antonio, Representative Minjarez has been appointed as a Community Representative by Mayor Ron Nirenberg to the San Antonio Mobility Coalition (SAMCo) and appointed to the ConnectSA Board, a nonprofit the Mayor created with Bexar County Judge Nelson Wolff. She is also part of the Planning Advisory Group for the Young Children’s Resource Center and Crisis Nursery.

Born and raised in El Paso, Texas by two hardworking parents, Representative Minjarez’s background is deeply rooted in the fight for social justice. From an early age, Ina and her sister were taught that hard work and education were the keys to opportunity. She was awarded several academic scholarships to attend the University of Notre Dame. It was there that she began writing about her passion for resolving social inequities as well as traveling to serve the underprivileged and oppressed in between her class schedule. She gained valuable field experience picking crops with migrant workers and interning in the office of an El Paso attorney, assisting migrants and refugees file for legal residency.

After graduation, Ina attended St. Mary’s Law School in San Antonio. As a legal student, she interned with the Bexar County Criminal District Court Administration, creating a pathway to her successful career prosecuting defendants charged with crimes against children. After graduating law school, Ina opened her own private practice; representing children who were victims of abuse and neglect in the Child Protective Service system. She has also represented workers in employment law disputes and on-the-job injuries.

Representative Minjarez is married to her husband, Leo Gomez, whom she has two wonderful step-children with—Manuel and April Gomez. In her free time, she enjoys running marathons and spending time with their three dogs, Pinot, Pepe, and Lily.