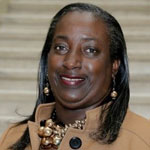 Representative Scott began her political career in 2007 as a School Board Member for Clayton County before running for State Representative in 2010, which she won against two candidates without a runoff. She is now going on her 8th year as a State Representative. She joined the United States Army (SSG) in 1984 and served in Seoul, Korea, Ft. Hood, Texas, and Nurnberg, Germany. She earned her BS Degree from Florida A&M University School of Business and Industry in Business Management and received her teaching certification from Armstrong State University in 1994. Representative Scott hosts many annual events that give back to the community each year in Georgia – a Senior Citizen Breakfast, a Veterans Fish Fry, and a Christmas Party with gifts for the Homeless and Less Fortunate Children in District 76. She serves on the following House Committees: Defense and Veterans Affairs, Human Relations and Aging, Science and Technology, Reapportionment, and Special Rules. Scott was the 2013 Georgia Legislative Black Caucus Legislator of the Year and a 2013 NFWL Women of Excellence Winner.