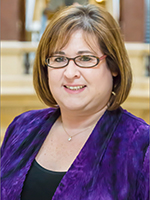 Representative Lisa Subeck has represented the 78th District in the State Assembly since January, 2015. She currently serves as the Democratic Ranking Member of the Committee on Local Government and of the Committee on Public Benefit Reform. Rep. Subeck also serves on the Health Committee, Children and Families Committee, and Committee on Family Law. Additionally, she serves on the Governor’s Council on Domestic Abuse, Speaker’s Task Force on Foster Care and served on a legislative Study Committee on Access to Civil Legal Services.

Prior to her election to the State Assembly, Rep. Subeck served two terms on the City of Madison Common Council. As a City Council member, she successfully worked to bring much needed services to vulnerable neighborhoods, expanded access to public transit, improved public safety, and protected vital community services.

Rep. Subeck been active in state and local politics, both personally and professionally, for nearly 20 years. She is a graduate of University of Wisconsin – Madison, and her past work includes serving as the Executive Director of United Wisconsin and as the Executive Director of NARAL Pro-Choice Wisconsin. Before that, Rep. Subeck worked to improve the lives of women and families through her work in the social services field focusing on issues of poverty, homelessness, economic empowerment, and affordable housing at YWCA Madison.
Rep. Subeck began her career in early childhood education, working for several years with the Head Start and Early Head Start programs and also teaching technical college courses in early childhood education at Madison Area Technical College. She helped launch Hope House, a transitional housing program for young mothers of infants and toddlers.

Rep. Subeck’s current and past volunteer work includes Big Brothers/Big Sisters of Dane County, the YWCA Racial Justice programs, and the Wisconsin Youth and Family Center. She has served as President and Treasurer of Woodhill Condominium Association. She was a member of the Southwest Neighborhood Plan Steering Committee and has served on numerous city and county committees. Rep. Subeck also served as a board member of the Wisconsin Head Start Association and as the Wisconsin State Chairwoman for Democratic Municipal Officials.