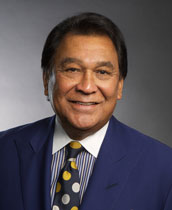 Robert (Bob) Mayo, President of Mayo Consulting Group, Inc., recently announced his retirement from the Cancer Treatment Centers of America® (CTCA) where he was both a co-founder and the vice chairman of the Board of Directors. He became Vice Chairman Emeritus on July 1, 2015.

Following a distinguished and decorated 20-year career in the U.S. Navy where he earned the Navy Commendation Medal, the Vietnam Service Medal, and was a four-time recipient of the Navy Achievement Medal, Mayo met Richard J Stephenson, the man with whom he would partner to revolutionize cancer treatment in America.

Mayo joined forces with Stephenson in 1980 as Director of Human Resources, leveraging his extensive naval experience in recruiting and organizational development to help build the foundation that would formally become CTCA® in 1988.

For more than three decades, Mayo held positions of increasing responsibility, including Executive Vice President, and President and CEO of CTCA. He also created the first Oncology Information Specialist (OIS) Center, which enabled patients to discuss their medical conditions with trained cancer care specialists via phone. This unique, direct-to-consumer approach, unheard of at the time, became the cornerstone of the CTCA patient-centered model. Through his ongoing leadership, CTCA evolved into one of the most successful, privately-held healthcare organizations in the nation. In addition, Mayo also developed strategic filters that led to his selection of four of the five hospital sites that make up the CTCA network today.