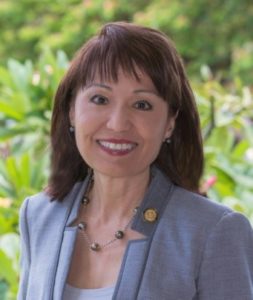 Donna Kim began her role in politics as a State Representative of Hawaii in 1982. From 1986 to 2000, Kim served on the Honolulu City Council. Elected to the Senate in 2000, Senator Kim has chaired the Committee on Tourism, the Committee on Ways and Means, the Special Committee on Accountability, and the Committee on Tourism & Intergovernmental Affairs. Still representing Hawaii’s Senate District 14, Senator Kim served as Vice President of the Senate from 2003 to 2006 and again from 2011 to 2013. In 2013, Kim became President of the Hawaii Senate until 2015. She currently serves as Senate President Emeritus and chairs the Committee on Government Operations. Kim has professional experience with Motorola Communications, Bank of America, The Pacific Institute, Models of the Century, and others. Her community involvement includes the Kalihi Business Association, the Filipino Chamber of Commerce, the Hawaii Korean Chamber of Commerce, and the Special Committee on Studying Effects of Economy on Judiciary. In 2015, Senator Kim was honored with the Korean American Foundation of Hawaii Light of the Orient Award. She attended both the University of Hawaii and Washington State University.