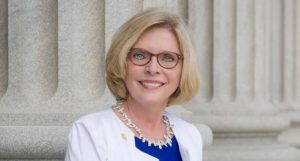 Elected in November 2012, Senator Shealy serves as one of only four female members in the South Carolina Senate and offers her wealth of business experience to our state’s upper chamber. Senator Shealy also is the first Republican female to ever chair a South Carolina Senate Committee – serving as Chairman of the General Committee. In the Senate, she has led efforts to eliminate the state income tax; and, for her efforts, Shealy received the South Carolina Friend of the Taxpayer Award in 2013. She has also led efforts to reform the South Carolina’s Department of Social Services to truly protect our most vulnerable children, and was recognized as Legislator of the Year by the National Association of Social Workers in 2015. Senator Shealy has also passed legislation enforcing stronger penalties for criminal domestic violence in South Carolina, for which she was then recognized as the 2015 Legislator of the Year by the South Carolina Coalition Against Domestic Violence and Sexual Abuse. She is a licensed Life, Accident and Health Insurance Agent and has held a Property and Casualty Insurance License since 1976 and a South Carolina Brokers License since 1993. Senator Shealy works as an insurance consultant for Keenan Suggs in Columbia, helping other job-creating individuals and businesses daily.