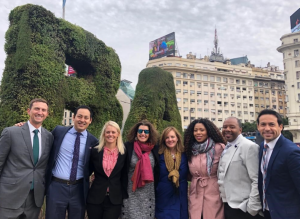 In July 2019, 8 strangers from across the US met, and quickly bonded over a cup of coffee as they traveled to the southern hemisphere to spend 10 days in Argentina. The group’s makeup was deliberately diverse- 4 women, 4 men, 4 republicans, 4 democrats. The group was able to gain a better understanding of how interrelated culture, history, politics, socio-economical issues are all intertwined in the Argentina and the United States. During the trip the group met with presidential candidates, sitting members of congress, judges, governors, mayoral candidates, unions representatives, the U.S. Ambassador and many other influential decision makers.

Argentinians say that politics a sport, and it’s TRUE. It is discussed everywhere- even in our cab rides around Buenos Aires. They are very informed not only on their on domestic politics, but politics of other countries around the world. The people of Argentina are wary of their government as the past 20 years have been difficult. Former President Christina Kirchner, who is a vice-president candidate in this year’s elections, has several corruption and bribery charges against her, but as a current sitting senator, cannot be prosecuted. In the last several months under President Muricio Macri, the Argentine Peso has lost fifty percent of its value. As we walked from meeting to meeting, people would stand on the sidewalk shouting “cambio” hoping to make the change for American dollars. The country also received a 56 billion dollar loan from the IMF.

Primary elections are coming up on August 11. Candidates need 1.5% of the total votes to the election in October. Now, the interesting part in Argentinian election, a candidate must have 45% of the votes o or 40 percent with 10 points over the runner-up in the first round. Otherwise, the top two candidates will face each other in a second d on November 24. Did you know that voting in Argentina is mandatory and if you don’t there is a fine? From our conversations in meetings and taxi drivers (who are very informed in world history and politics), the fine is very minimal.

Also, very interestingly- presidents may run for consecutive reelection once, then must sit out one four-year term before qualifying to run again. In efforts to get women in politics in the masculine society, a law was passed that all the lists of candidates for Congress must necessarily alternate male and female candidates, to ensure equal participation. The new law also requires that women must make up half of the lists of candidates for national positions of the political parties, although in this case it does not require an alternation of women and men.

It is essential that we continue to take a global perspective, to learn, understand the how’s and why’s of different areas of this globe. I speak behalf of our delegation, that we are very thankful to ACYPL (American Council of Young Political Leaders), the State Department and FURP (Fundacion Universitaria del Rio de la Plata) for this opportunity to go with an open mind, to learn about another culture, politics, and return with ideas to improve our part of the world, and further appreciation for the communities, states and nation that we have built.