NFWL staff and board members are expanding the NFWL network by dropping in to state capitols around the country for informal chats with women legislators at their offices. These Capitol Chats are a great opportunity for elected women to learn a little more about NFWL and how they can get involved with our programs and events. Want to engage with NFWL in your state? Contact Brenna Kehew Sculley at brenna@womenlegislators.org. 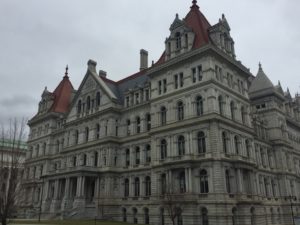 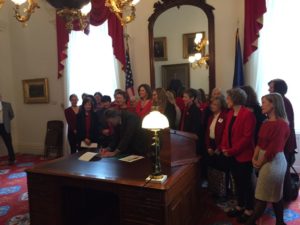 Vermont took the time to acknowledge Equal Pay Day on April 4 in an event showcasing the newest report from Change The Story VT (CTS), an initiative fueled by the The Vermont Women’s Fund, Vermont Commission on Women, and Vermont Works for Women. The Vermont Women in Leadership report outlines important connections between women’s leadership in political, civic and professional spheres and women’s economic security.  The event featured the Governor signing the Equal Pay Day Proclamation, and featured powerful speakers committed to fast-tracking women’s economic status in state. The speakers presented new data on the participation of women in various leadership roles, including federal, state and municipal government, Abenaki Nations, academia, law enforcement, and the corporate and non-profit sectors. 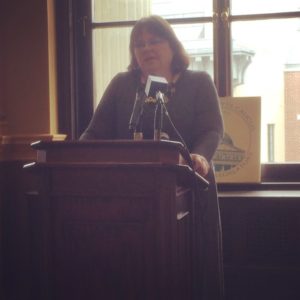 Women Who Lead: Past to Present (Women’s History Month Celebration) was a panel discussion hosted on March 28 by the Massachusetts Caucus of Women Legislators with Senator Jen Flanagan, Rep. Colleen Garry, Rep. Christine Barber, former Senator Lois Pines, former Rep. Kathy Teahan.  One speaker, Senator Lois Pines, spoke about the continued state policy battle she led in Massachusetts defending the Equal Credit Opportunity Act and the right for women to have a line of credit without a husband. Recently, Massachusetts passed S.2119, now Chapter 177 of the Acts of 2016. The new law will go into effect July 2018, and gives women more opportunities to bridge the wage gap by enabling employees to discuss their salaries freely, and prohibiting applications from detailing their salary history. The bill was passed with bipartisan support, and supported by the Massachusetts Caucus of Women Legislators led by Executive Director, Lauren Scribi. 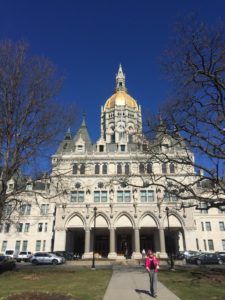 Connecticut’s Commission on Women, Children and Seniors hosted an exciting event on March 8, building upon the important conversations of last years Women’s Day by once again focusing on a conversation about feminism and intersectionality. Attendees heard from Kimberly Norwood, a professor of Law and African America Studies at Washington University Law, about what intersectionality is, why it matters and how we can use this practice to guide our daily work as individuals, non-profits, state agencies, leaders and lawmakers. NFWL was proud to be in attendance. 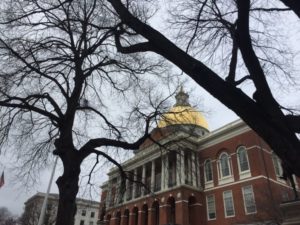 On February 16, NFWL walked the halls, connected with impressive MA leaders, and met with the exceptional Massachusetts Caucus of Women Legislators.