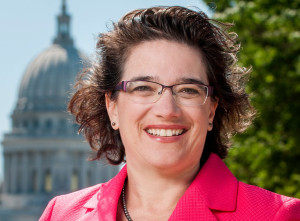 Representative Sargent has been leading the charge in the state of Wisconsin to get rid of the luxury tax placed on feminine hygiene products, otherwise known as the “Tampon Tax”. With Rep. Sargent in the midst of a fight for women’s rights, we thought who better to interview in honor of Women’s History Month?

Why did you decide to run for office?

I actually served in local government before I was elected to the state legislature. It happened because people were asking me to run for office and initially my answer was, “No, I have young children. I am a small business owner. My plate is pretty full.” I was already very active in my community. But one day my two oldest sons, who were at the time in late elementary school, came home from school, and they had a teacher who had said, “We’re going to take a day off of school and play in the park and have a free day. But in order to earn that, I need you all to do community service.” 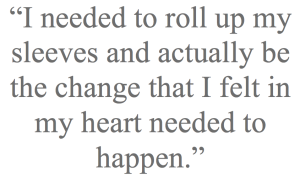 And my kids came home, and they were belly-aching. They said, “Mom you make us do so much community service already. It’s not fair that we have to do more.”

I realized at that point in time that the way my children sounded to me, kind of petulant and frustrated that they were already doing so much, that must be how I sounded to the people who were asking me to consider running for local government for the county board. The people I kept saying no to. I realized that I needed to show my boys that you need to step up sometimes, and make yourself a little bit uncomfortable, and serve your community in a new way.

It was a pretty uncomfortable decision for me to make, but I realized that if I wasn’t happy with what was happening, shame on me for just sitting on the sidelines. I needed to roll up my sleeves and actually be the change that I felt in my heart needed to happen. So I decided that I was going to run for state level office, and I’m in the middle of my second term now.

What challenges or advantages have you faced being a woman in the public  service?

In the state of Wisconsin, we’ve had over 6,000 people elected to the state legislature since we became a state. We’ve only had 132 women.

I hope that by serving in office, I am providing a path, and an example of leadership where young women can look up and think, “Melissa did it. She had four young kids at home and she ran for office. And she was able to not only be a mom, something she always dreamed of, but she was also able to serve the people of her community in this way.”

Because, on days when I can’t breathe, when I feel like I’m frustrated, I don’t have a lot of people who were ahead of me that I can call and ask, “How did you do it, when you had these kids at home? What sort of things did you do to help take care of yourself? What did you find that helped you be more effective or more efficient in your job?”

So there are definitely struggles for women in office. But I think it’s even more important that we do run for office, and we do what we do, because there haven’t been as many of us, and we need to change that culture.

What does Women’s History Month mean to you?

I think women’s history month means two things to me. Not only is it honoring the shoulders on which I stand and the women that fought for me to have the right to vote as well as the ability to run for office and to know the fabulous things that they have done, not only elected officials, but scientists, mothers, and change makers through history.

So it is paving a path, honoring what it is that is yet to come in the future, and giving them the tools, cheering them on as best we can. This is our month to do that.

What is your message to young women?

It’s important to always be curious, even when you grow up; you need to continue to be curious. You need to be sincere to yourself and sincere and honest to your community. But also that on days when you step outside of your comfortable box, you step outside of what it is that you know the best, you will be a stronger person for having done that, and you will actually make your community stronger as well

I think it’s also important that, as women, we realize that often times it feels like our candle is burning, and we are doing our best to just keep it burning because the wind is trying to put it out. But when we bring our candles together, and we support each other, they actually burn brighter. If we were to build walls around ourselves and forget that we actually have a community where we can support each other, we do not benefit.