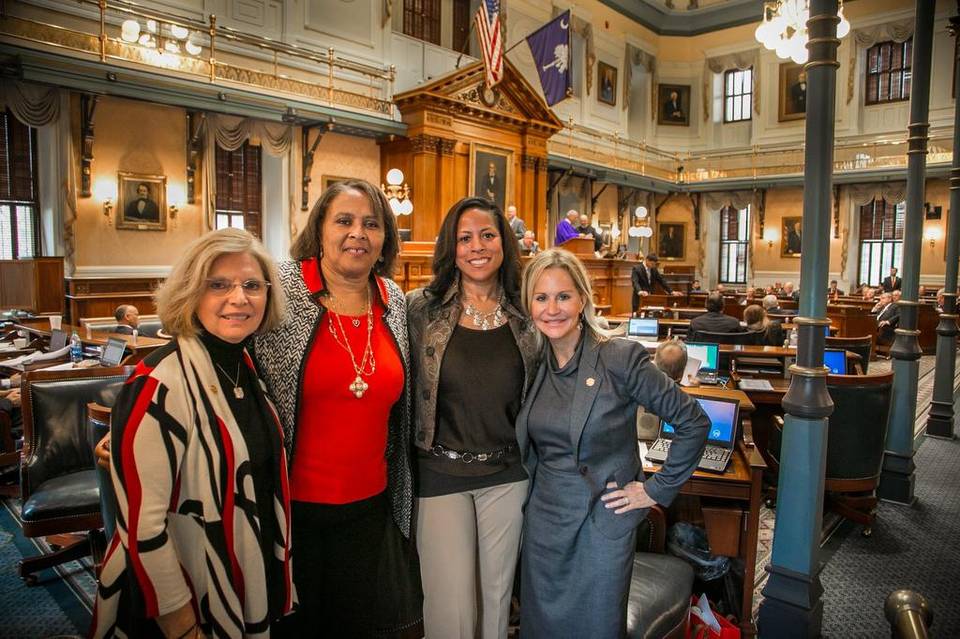 COLUMBIA, SC- After serving three years as the lone woman in the S.C. Senate, Katrina Shealy is happy to have more company.

“The first two years, I’m not sure they knew I was there,” the Lexington Republican said. “You know, every day it would be like: ‘Gentlemen of the Senate – wait, we’ve got to stop. We’ve got to start over again.’ ”

That is slowly changing. Four women, including Shealy, were sworn in Tuesday to the state Senate, the most ever at one time in the State House’s upper chamber.

And while the percentage of State House seats held by S.C. women still pales in comparison to national averages, the Palmetto State’s female senators say the growth of their ranks is a boon to the 46-member chamber, long dominated by men.

“One hundred years after women got the right to vote, it’s exciting to see some progress in our State House, and it’s really important,” said Julie Hussey, co-president of the League of Women Voters’ South Carolina chapter.

A ways to go

South Carolina now ranks 22nd in the country for gender parity in elected offices, up from 46th in the country in 1993, according to Representation 2020, a Maryland-based group that encourages women to seek public office.

Still, women have a long way to go at the State House.

Women make up 51.4 percent of South Carolina’s population but held just 14.7 percent of the 170 seats in the S.C. Legislature last year, far below the national average of 24.4 percent.

The State House also is no stranger to allegations of sexism. In 2001, an anonymous memo suggested female House pages wear revealing blouses and consider underwear “optional.”

Last year, state Sen. Tom Corbin, R-Greenville, publicly apologized after joking at a dinner with lawmakers that women are a “lesser cut of meat,” a reference to Eve’s creation from Adam’s rib in the Bible.

Shealy responded to Corbin’s apology on the Senate floor by encouraging women not to be discouraged by obstacles to their success.

The S.C. senators who recently have overcome those hurdles say they are excited to bring a stronger women’s voice to the Senate.

“I’m very, very excited to be working with who I term my sister senators,” Senn said. “While I’m certainly looking forward to working with my male colleagues, I do believe that women approach things differently, and we think differently.”

The four senators – two Republicans and two Democrats – already are thinking of forming a women’s caucus to brainstorm issues they can rally behind.

Women legislators, typically, are more sensitive to children’s issues, and the needs of parents and working families, advocates say.

Shealy, a Lexington Republican, said she hopes for the group’s support this session in looking at the state’s embattled Social Services Department and care for seniors. McLeod, a Richland Democrat, said she wants to improve on the state’s dire domestic violence record and push for equal pay for women.

“It makes me hopeful about the future, just knowing that I serve alongside senators who understand what it’s like to be a woman in this state and some of the challenges that are specific and unique to us,” McLeod said.

“Knowing that I have some fellow females here, neither myself nor Senator Shealy will be apprehensive about giving our perspective, because we know there will be other people out there who understand,” Bright Matthews said. “Now that we have more numbers, I can assure you the Senate will see and hear our voice.”

“They bring a perspective,” he said. “It helps on any issue.”

‘It engages. It empowers’

Having a record number of women in the Senate also could inspire the next generation of women leaders, Bright Matthews and McLeod said.

“It engages. It empowers,” McLeod said. “I saw that the whole time I was campaigning. Young women and little girls from across the state were engaged and paying attention.”

Bright Matthews said her family was surprised when she decided to run for the Senate in 2015. But then her four daughters took over her campaign, with help from her five sisters and her sorority sisters. Bright Matthews won with nearly 89 percent of the vote.

“When I go into my church and start talking, I see those young girls,” she said. “They’re ready. They saw how we did it.”